KH Gallery Ashiya will hold the special exhibition “Kenji Etori x Hiroko Koshino”. Etori’s three-dimensional plastic works are human figures molded and shaped from human bodies using wire nets. Their emerging surface creates a vague existence. Attracted by their light atmosphere, Koshino invited Etori for collaboration. Etori who creates human outline from flat wire nets with his hand, and Koshino who has been questioning human spiritual richness through clothes?works by these two artists pursue how the surface should be and depict the inner spirit and life.

In the exhibition, the installation of Etori’s human figure modeled and clothed with a light cloth by Koshino will be displayed along with their individual works. Its creation process is just like the fashion scene where she would make clothes using hands in front of a model. Drapes, twists and volume created in the hands of Koshino cover the body softly and create liveliness, and summer sunlight that shines on the concrete walls produces a dramatic atmosphere.
Please come enjoy the collaboration by the two artists who question the human body and spirit through art and fashion. 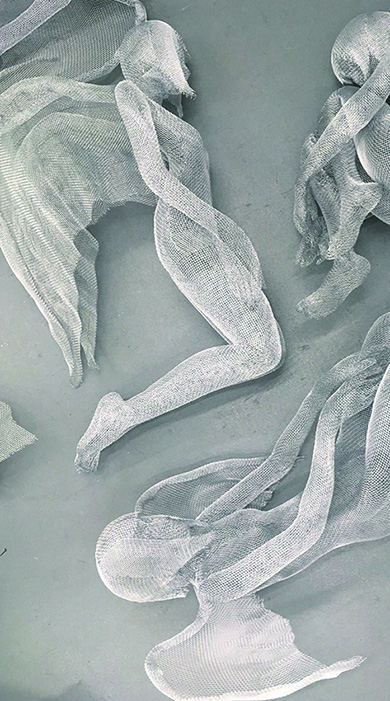 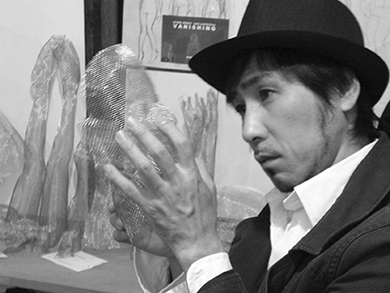 At KH Gallery Ashiya in 2018, you can see an exhibition titled “Hiroko Koshino Kira －Brilliance of the East and West－,” a shimmering world of fashion between the East and West, focusing on a collection of works and paintings by Hiroko Koshino.
Koshino strives to create new beauty by bringing modernity to Japanese traditional culture, based on her experience spreading unique fashion from Japan to the world. This attitude is common to both her art and her Fashion.
The “ki” in “Kira” refers to twill weave, while the “ra” means thin -weave silk fabric.
The word represents beautiful clothing and the people who wear it. The installation of ornately colored paintings and clothing is remini scent of a gathering of elegant people.
Enjoy the seasonal atmosphere throughout the transition from winter to spring and on to summer.

Hina dolls will be exhibited in the Japanese-style room until Saturday, April 14. 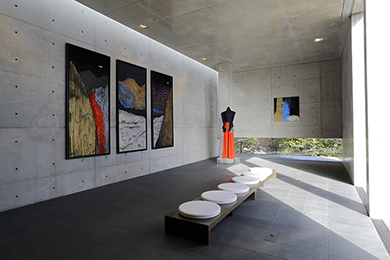 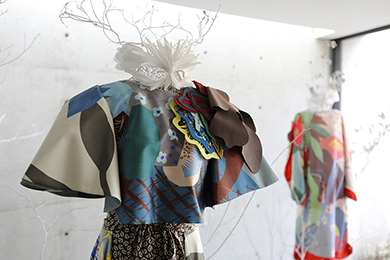 The KH Gallery Ashiya is holding the “Susumu Notomi x Hiroko Koshino – The Blue, a second encounter” exhibition. Koshino who was starring in the NHK General TV’s show, “Tsurube’s Salute to Families” (Tsurube no Kazoku ni Kanpai) met the pottery maker Notomi while visiting Hagi, Yamaguchi Prefecture 7 years ago. The distinctive “Blue” colors of his work left a profound impression. The two became friends and held the collaborative exhibition “Susumu Notomi x Hiroko Koshino – The Blue where everything began” for the first time in KH Gallery Ginza last year. Enjoy a “Second encounter” in the KH Gallery Ashiya with its peaceful and breathtaking atmosphere designed by Tadao Ando this autumn.

Notomi talks about Koshino’s works of art and the awareness towards Ando’s architecture at the Ashiya exhibition. He wants to express an unprecedented “blue” like being in space in the solemn atmosphere surrounded by undressed concrete walls. His new pottery works created from this enthusiastic spirit will be on display. Koshino will exhibit her works of art including new items and new picture plates. Among her works, you can enjoy a wide range of colors including “blue” as well as the light and shade of black along with the glimmering of silver. The picture plates were created in an ambitious collaboration with Notomi creating the “blue” plates and Koshino adding the pictures with vivid colors.

This exhibition features pottery, pictures and architecture. Relax and enjoy this atmosphere where the uniqueness of the artists intersects on a profound level. 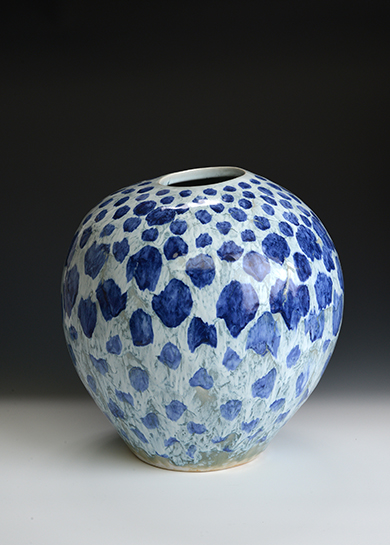 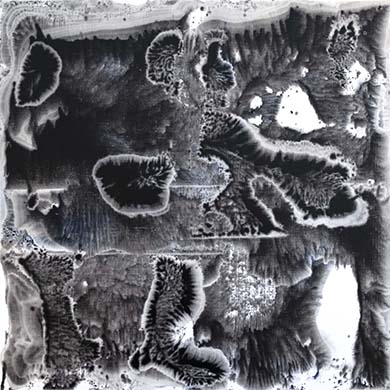 KH Gallery Ginza will be extension of schedule for Hiroko Koshino The Portrait until October 22th (Sun). 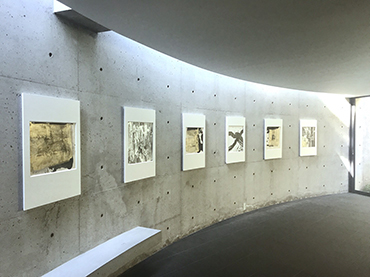 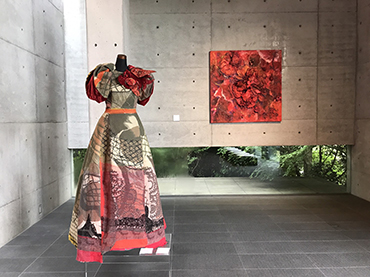 For the year of 2017, KH Gallery Ashiya will present visitors with various comparisons in the context of Koshino’s creative works, under the theme of “Contrast.”. An artist always seeking for different ways of expression instead of remaining still at one place, Koshino has reflected her seemingly conflicting views and values to numerous masterpieces.
One time, she may depict a tranquil world of elegance and simplicity with sumi-ink. Another time, she may use vivid colors to evoke emotions. It is as though the biorhythms of life are embodied by the myriads of artworks that oscillate between Stillness and Motion.
The exhibition will also seek to illustrate the contrast between Fashion and Art for the first time in KH Gallery Ashiya. Through their encounter with art, news lives will be breathed into garments that have been incorporated into the installation.
The beauty of artworks enclosed in a planar dimension and the beauty of lightweight and elegant garments, both embraced within the beauty of the solemn architecture designed by Tadao Ando. This year, we invite you to enhance the dynamic transition from the landscape of spring to summer with the beautiful contrasts brought about by the clash and synthesis of these outstandingly unique elements of beauty. 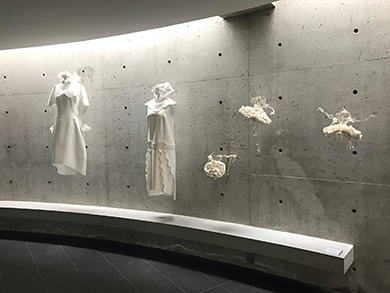 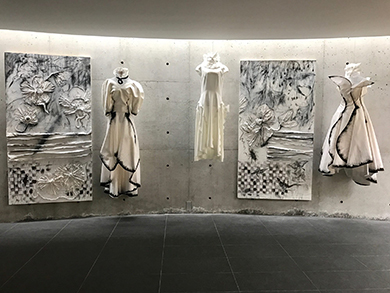 The KH Galleries will hold the exhibition, “The Year’s First Kimono – Koshino Hiroko Kimono Exhibition -” at the two venues of Ginza and Ashiya. With her grandfather running a kimono fabric store, Koshino had been exposed to kimono and traditional performing arts since childhood. Through this deep connection, Koshino has occasionally drawn on such elements as sources of inspiration. From time to time, Koshino would pick up a brush and produce a kimono adorning her own drawing. This practice of wearing one’s own drawing, which she has continued for more than 10 years, symbolizes the ultimate fusion of art and fashion. The pines, bamboos, cherry blossoms, and other traditional motifs depicted in light brush strokes give the kimonos significance as not only attires, but also powerful pieces of drawings. This exhibition will be presented in a creative, stylish space where such treasured kimonos are showcased with calligraphy works and drawings.

At the Ashiya gallery, kimonos will be arranged inside the gallery’s unique Japanese-style room and on the curving wall surface, amidst the soft rays of light penetrating through the setting landscaped by architecture Tadao Ando. The exhibition will also display a collection focusing on Koshino’s newest oil paintings, orchestrating a sharp contrast between the “Beauty of Japanese Culture.”

As we move ahead into the new era, Koshino uses kimono as a medium that transcends time to present her vision of Japanese culture and lifestyle. The KH Galleries invite you to immerse yourself in a setting capturing the Beauty of Japan to start off the New Year, where a rise in the momentum to redefine and present “Japan” to the world will be seen. 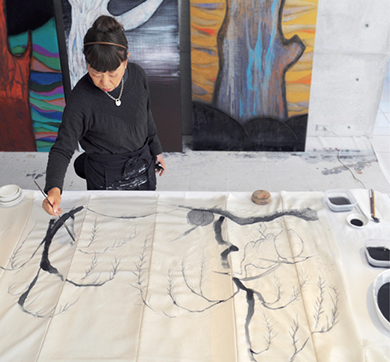 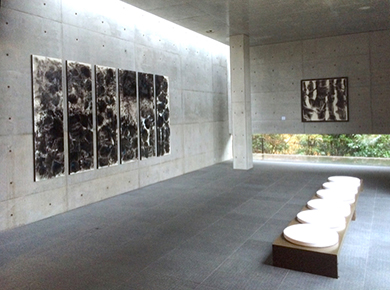 A heartwarming gentle painting for the deepening autumn. The theme for KH Gallery Ashiya’s second period exhibition of the year 2016 is “The Dreams of Mother Earth”.

The twinkling gold and red, the smooth, cloud-like white and the earthly materials of gypsum and cardboards; these are all symbols of vitality that are reminiscent of “Our Mother Earth”, as expressed in the paintings. Koshino’s magical works artfully orchestrated by a variety of materials have brought hope and dream to many of her appreciators. The inspirational paintings aim to encourage everyone to shine like the sun and to follow the unique path of their own lives.

This exhibition showcases dynamic, expressive artworks drawn with warm and neutral colors. Works including an oil painting inspired from the life of Aung San Suu Kyi, depicting a pair of praying hands, as well as a masterpiece resembling the colors and undulations of earth, embellish the otherwise monotonous gallery. What is noteworthy of this exhibition, is that KH Gallery Ashiya will, for the first time ever, exhibit fashion sketches and allow visitors to imagine the journey in which Koshino freely travels back and forth between the realms of painting and fashion. With the advent of a fruitful autumn approaching with winter just behind, we invite you to a cozy, warm atmosphere against the backdrop colored with the hues of the transitioning nature.

To make a reservation, submit the online application form linked to this page with all the necessary fields completed. 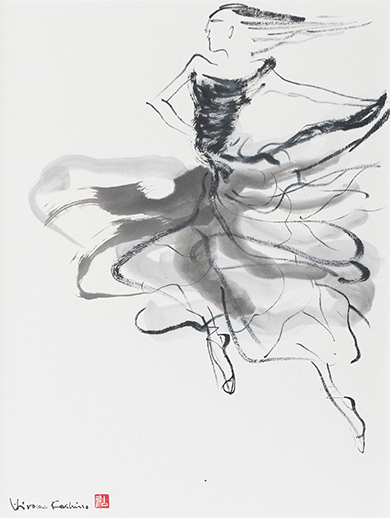 A fragrant breeze signals the dawn of a new year. Under the theme of “Balmy Breeze”, KH Gallery Ashiya’s first period exhibition of the year 2016 collects freshly inspired works related to “Japanese sumi ink”, celebrating the season embraced by wisps of wind carrying the youthful aroma of budding leaves.
For Koshino, ink has been a familiar medium since the time she began drawing. The fresh and vibrant brushwork in her early Bokusho, or abstract calligraphic drawings and other inkworks displayed in this exhibition are also present in her later works which utilize various media other than sumi. In her latest oil painting, she experiments with original shading techniques to create a sense of transparency that is unconventional for an oil painting. The exhibition also showcases Koshino’s creative efforts that cross borders like a swift wind, through works including calligraphy, the mysterious setting of blue created with oil paint, and ceramics created upon her visit to the 350-year-old traditional “Ohi ware” ceramicist in Kanazawa City of Ishikawa.

Bringing together a collection of significant works by Koshino, a promoter of Japanese beauty, this exhibition gives a new spin to the conventional Japanese “sense of sumi”. Come take a moment and appreciate art in a relaxing setting of architectural beauty, light, and glistening greenery.

To make a reservation, submit the online application form linked to this page with all the necessary fields completed. 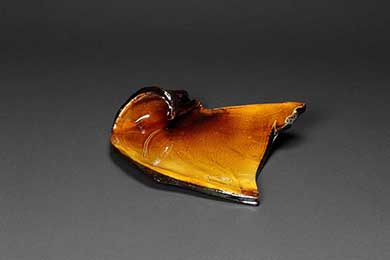 HIROKO KOSHINO
collaborate with
×
circle side
Resonance with Light

Get an early look at Hiroko Koshino and circle side’s collaboration exhibit “Resonance with Light” at KH Gallery Ashiya.
In this exhibition, circle side redefines Koshino’s organic and colorful oil paintings as a new form of “light”, by extracting textures and outlines from the paintings and converting such information into audio and video.
The immersive experience brought out by the resonance between the two approaches on art is more than a simple addition.
We invite you to come experience the resonant “light of paintings” echoing endlessly inside a space designed by renowned architect Tadao Ando.

《artist / circle side》
A creator quartet launched by artists and programmers to present works that go beyond traditional genres such as art, sound and design. Members include Akiko Azumi, Hiroo Ogasawara, Hiroaki Kitamura, and Yuji Hamada. 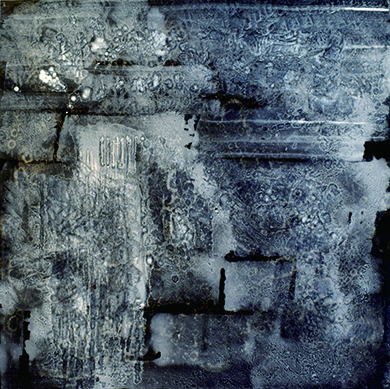 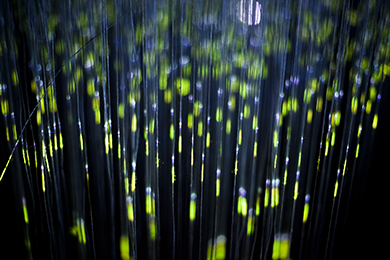 KH Gallery Ashiya is holding an exhibition titled “WEEKEND,” presenting artworks of Hikoro Koshino, along with four other young artists as a special event before the annual opening period of the gallery.

In the fall of 2014, Koshino exhibited a painting and installation works at the Biwako Biennale — the interactions she had there with various artists from different generations has highly stimulated and influenced her own works.

This time, Koshino creates a space which enables her to explore new territories through interactions with four up and coming artists at her own gallery in Ashiya. Koshino hopes that the gallery can be used as a platform for exhibiting artworks of young artists of the next generation — a small experiment for the development of KH Gallery Ashiya.

We would like to take this opportunity to invite you to visit KH Gallery Ashiya on weekends, during the 7-week exhibition wherein Koshino, along with the other participating artists, has created a space like never before.

Get off the bus at “Okuike” (20-25 minutes from bus terminal).
Please go up the steps next to the bus stop.
You will see the gallery on the right side when you reach the top of the stairs (2 minutes from the bus stop).

* Free admission.
* No reservation needed.
* There are no parking lots at KH Gallery Ashiya. Please use public bus service.
* The gallery will close once the Hankyu bus service is suspended. 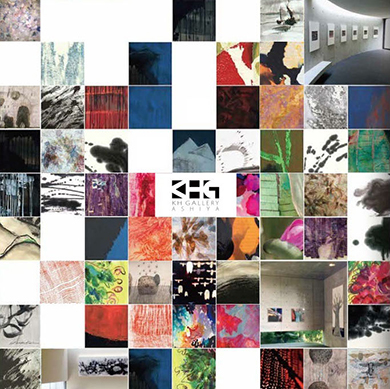